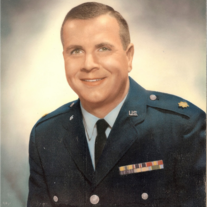 Bert Avis, (born June 21, 1935), passed away peacefully on Monday, March 25, 2019 at his home in Wirtz, Virginia after a long battle with pulmonary fibrosis. He was a loving husband to his wife of 62 years, June, and a caring father, grandfather, son and brother. He will be greatly missed by his family who spent many summers visiting him at his lake house on Smith Mountain Lake in Wirtz, Virginia. He was born and raised in Somers Point NJ. He graduated from Ocean City (NJ) High School in 1952 and would often reflect on the great memories he had playing football, basketball, and baseball. He earned a full scholarship to play football at Gettysburg College (PA) where he graduated in 1956. He was enrolled in ROTC during college, began service as an Air Force officer after graduation and was stationed in various states across the country over a 28-year career also including service in Vietnam during the war. During his military service, he earned a Master of Science in Systems Management from University of Southern California. He had a passion for life and athletics and enjoyed coaching his kid’s sports teams as they were growing up and eventually relished in following his 10 grandkids in various activities. He moved to Falls Church, Virginia in 1979 where he retired from the Air Force at the rank of Lt. Colonel in 1985 and earned a Bachelor of Accounting and then an MBA from the University of Maryland. He passed the CPA exam and started his own accounting practice in Falls Church Virginia called Avis Accounting Services. After 18 years of performing accounting and tax services, his youngest daughter took over his practice so that he could enjoy life full time at Smith Mountain Lake, however, he continued to prepare tax returns until a few years ago. His days at Smith Mountain Lake were filled with trips in his airstream, rides around the lake on his boat, long walks with his beloved dogs and quality time with his lifelong love, June. He is survived by his wife, June (Krenz); his sister, Georgiana Miller of Somers Point, NJ; his daughter Cynthia (Robinson) and her husband Jamie of Elizabethtown, PA; his son, Steven of Cologne, NJ; his son, Michael and his wife Karen of Springfield, VA; his daughter Mary (Niedringhaus) and her husband Michael of Fairfax Station, VA; and 10 grandchildren: Matthew, Bryan, Justina, Alexandra, Aaron, Samantha, Anthony, Andrew, Daniel and Sarah. He is also survived by many nieces and nephews. He was predeceased by his daughter, Julie Anna, parents Frederick and Jane (Jackson) Avis, his sister, Jane Hardin, and three brothers, Frederick Avis Jr., Joseph Jackson and Joseph Avis. In lieu of flowers the family has requested that memorial contributions be made to Gentle Shepherd Hospice, 6045 Peters Creek Road, Roanoke, VA 24019. He will be laid to rest at Arlington National Cemetery on Wednesday, August 21, 2019 at 1:00 p.m. Arrangements by Conner-Bowman Funeral Home & Crematory 62 VA Market Place Drive, Rocky Mount, VA 24151 www.connerbowman.com
To order memorial trees or send flowers to the family in memory of Bert Avis, please visit our flower store.