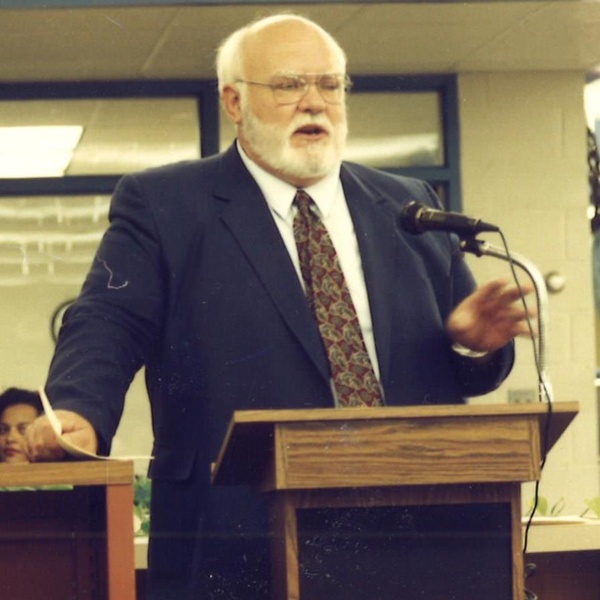 Barry James Jefferson, known as Jim, died peacefully on May 24, 2022 at the age of 75 after a lengthy illness. He was preceded in death by a sister, Sarah Jefferson Hamblett; his mother and father, Dorothy Walker Jefferson and William Davis Jefferson; his paternal grandparents, Willy Thomas Jefferson and Vesture Davis Jefferson; his maternal grandparents, Walter Walker and Mary Lou Anderson Walker; and an uncle, and his namesake, James Jefferson, who died in France during WWII. Jim is survived by his wife, Donna E. Jefferson, and daughter, Carmen Krieger; his sister, Sandra J. Ruff, and her two children, Temple Ruff and H. Alexander Ruff; a dear cousin, Betty Sue Dellinger; and many special friends. After graduating from VPI in 1968, Jim taught at Franklin County Junior High School until 1974. In 1979, he was elected to the Franklin County Board of Supervisors by one vote and was known as “Landslide” for many years thereafter. Dave Melesco was elected Supervisor that same year and allowed Jim to read law with him, a three-year program and something for which Jim was forever thankful. Jim passed the bar exam in 1983 and practiced law for the next 33 years. Jim was honored to represent Franklin County as its sole counsel from March 1989 until his retirement in 2016, while also maintaining a private practice. Jim said he accomplished this length of time by having and giving opinions on the law and leaving policy to the Supervisors. Throughout his life, Jim kept an interest in farming and was actively involved in the family dairy business until the age of 37, when he passed the bar. In lieu of flowers at the service, please plant a native tree in your yard or a fragrant flower for the bees, or donate to or adopt a pet from a local animal shelter, or make a donation to the Glade Hill or Cool Branch Rescue Squads. Despite Jim’s gruff reputation, he was a sucker for neglected critters and was especially close to our beagle, Fyodor, and black cat, Behemoth. Jimmy loved the law, politics, his family and friends, and the game of chance and strategy that is poker. A memorial service is scheduled on Wednesday, June 1, 2022 at 1:00 p.m. at Conner-Bowman Funeral Home, 62 Virginia Market Place Drive, Rocky Mount, VA 24151 with Pastor Rick Poland officiating. Visitation will commence at 11:00 a.m. prior to the service. Arrangements by Conner-Bowman Funeral Home, Rocky Mount, VA www.connerbowman.com
To order memorial trees or send flowers to the family in memory of Jim Jefferson, please visit our flower store.