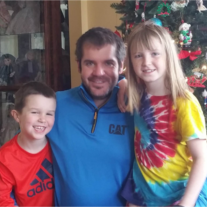 Roland Burgess Lindhurst, of Smith Mountain Lake, Virginia, (age 34), passed away on December 25, 2019, joining the ranks of those in heaven Wake Boarding. Roland was born in Alexandria, Virginia on September 3, 1985 a son of Robert Roland Lindhurst (deceased) and Dawn Dellinger Lindhurst. He graduated from Central High School in Woodstock in June 2004 and went into the building business. He acquired his love of building from his Grandfather, Burgess Dellinger and his Father, Rob Lindhurst. Roland was very talented at handling large construction equipment, especially the backhoe. In addition to his mother, Roland is also survived by the love of his life, Brittany Barlow and their two children, Camdyn Barlow and Ivan Barlow of Salem, Virginia. He is also survived by his brother, Devin Lindhurst: Grandfather, Burgess Dellinger; uncle, Wade Dellinger; and two first Cousins, Betty Dellinger and Rayna Cooper. In addition, Roland is survived by his two constant canine companions, Zelda and Star. In addition to his father, Roland was also preceded in death by his paternal Grandparents, Roland and Helen Lindhurst; and his maternal Grandmother, Dickie Dellinger. In lieu of flowers and in honor of Roland’s great love of animals, memorial donations may be given to the Humane Society of Shenandoah County, PO Box 173, Woodstock, Virginia or online at hsscva.org. Roland will be remembered for his many talents and passions. His hobbies included winning Wake Board competitions and downhill snow skiing races. A very talented athlete, he went to the Junior Olympics in March of 2000. In addition, he loved dirt bike riding, hunting, camping and boating. Roland was an outstanding cook and was famous for his mashed potatoes and barbequing. Roland loved to be with family and friends, serving up his delicious meals often served with his own home-grown vegetables and peppers. When Roland cooked, he would feed the masses. Finally, Roland will be remembered for his great sense of humor, the twinkle in his eyes when he smiled and his genuine love for his family and friends. A Celebration of His Life will be held on Sunday, January 5th 2020 from 1:00 to 5:00 pm at the Woodstock Moose, 152 Moose Road, Woodstock, VA 22664. Online condolences may be made at www.connerbowman.com. Arrangements by Conner-Bowman Funeral Home and Crematory, 62 VA Market Place Drive, Rocky Mount, VA 24151.
To order memorial trees or send flowers to the family in memory of Roland Burgess Lindhurst, please visit our flower store.