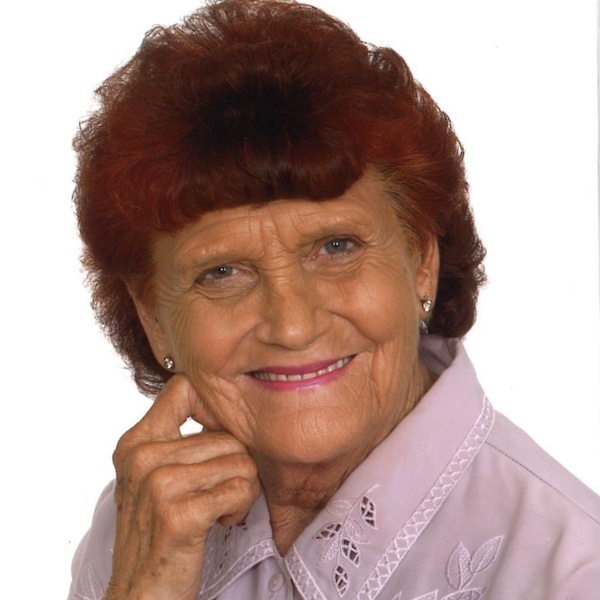 Ruby Jo Pate St.Clair, age 83, went home to be with the Lord on Friday, February 25, 2022, surrounded by her daughters. Ruby was born June 9, 1938, in Boones Mill, Virginia. Through the years, Ruby was also known as Ruby Red, for her signature red hair, and Jewel, which was her CB handle and referred to her years in the jewelry business. Ruby was raised in Boones Mill and attended Boones Mill Elementary, then Franklin County High School. When Ruby was in 11th grade, she moved to Roanoke to watch her brother, Wyatt’s, children. She went to Jefferson High School and graduated in 1956. After graduation, she worked at a ladles clothing store, then at a dry cleaner. While working at the dry cleaners, she met Herbert Stover and later went to work at his jewelry store. While working there she met two of her best friends, Joyce Jenkins and Linda Mayhew. The three of them enjoyed many years of fun working together. Ruby started out in bookkeeping and customer service, but later learned to restring pearls, melt and cast gold to make jewelry and engrave with a manual engraving machine. In the 1980s, Ruby went to work at J.C. Nordt Jewelers. After a short time at JC Nordt, she went to work at Fisher Jewelers. When Mr. Stover passed away, Ruby bought his jewelry business and owned her own jewelry store in Salem, Virginia, Ruby St.Clair Jewelers. Ruby ran all aspects of the business, from sales to repairs and creating unique pieces of jewelry. After her husband, Ab, passed away, Ruby sold the jewelry business and took over the operations of his business, St.Clair Floor & Tile. After selling his business, she started cleaning houses. Ruby met Albert “Ab” St.Clair at a restaurant where she went before school, and he delivered milk. They were later married in North Carolina. Ruby and Ab were the parents of five girls, Pat (Harry) Lucas, Teresa (Dennis) Lavender, Rose (Doug) Hurd, Susie (Ken) Meador, and Michelle (Jack) Murphy. Ruby has seven grandchildren, Danny, Heather, Wilbert, Jonathan, Airelle, Greg and Ashlyn. She also has 19 great grandchildren, Paula, Elisha, Danny, Aiden, Layla, Dixie, Kaden, Kylie, Kash, Chad, Cameron, Ian, Laura, Cailyn, Wesson, Kinley, Kylier, Kylah and Kayda. Ruby is also survived by two sisters-in-law, Ruby C. St.Clair and Delena St.Clair and numerous nieces and nephews. Ab passed away in 1991. Ruby later met James “Paul” LaPrad, Sr. and spent the next 14 years with him until he passed away. Ruby and Paul enjoyed listening to bluegrass music, going on drives, talking on the CB radio and spending time with friends and family. Ruby later met Herbert “Boce" Martin and they became great companions. They spent many evenings listening to bluegrass music and watching political news shows until his passing. While growing up in Boones Mill, Ruby played softball on a local team. Ruby later bowled on a league and won many trophies. Ruby was known for her signature red hair, always worn in a beehive, and it earned her the nickname of “Ruby Red". Ruby went on many ladies' trips to the beach, where she lounged in the sun, enjoyed good conversation and good company. Ruby was an avid Elvis fan, even getting in a scuffle once with another fan when Elvis threw one of his scarves into the crowd. Ruby and Ab raised five girls and set the example for them to have a strong work ethic. Ruby loved her girls more than anything and spending time with them was one of her favorite things to do. When the girls got married, Ruby considered her sons-in-law as sons that she never had. Church and serving others were also important to Ruby and, for many years, Ruby and her sister, Winnie, served a weekly meal at Boones Mill Baptist Church, feeding as many as 100 people on Wednesday evenings. Ruby was preceded in death by her parents, Robert and Virgie Pate, her husband, Ab, her long-time companions Paul and Boce, her sisters, Winnie and Lil, her brothers, Forrest, John and Wyatt, her son-in-law, Early Overfelt, her granddaughter, Alanna Collins, and her grandson, Chad Brugh. Special thank you to all of mom’s caregivers, especially the love and care shown to mom by CNA Pam and Nurse Penny from Gentle Shepherd Hospice. Words cannot express how much we appreciate the compassion, care and love given to mom by her daily caregiver, Ale Holland. Funeral services will be conducted 10:00 a.m. Monday, February 28, 2022, at Conner-Bowman Funeral Home with the Rev. James H. Steele officiating. Interment will follow in Blue Ridge Memorial Gardens, Roanoke. The family will receive friends Sunday, February 27th from 2 p.m. until 5 p.m. at the funeral home. Arrangements by Conner-Bowman Funeral Home, 62 VA Market Place Drive (Route 220 @ Wirtz Road) Rocky Mount, VA 24151. www.connerbowman.com
To order memorial trees or send flowers to the family in memory of Ruby Pate St. Clair, please visit our flower store.