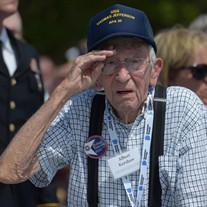 Albert Francis Kershaw, age 96, of Moneta, VA, formally of Delanco, NJ and Melbourne, FL, World War II veteran who served as a Machinist’s Mate aboard the USS Thomas Jefferson APA30 in the European and Pacific Theater, died on Monday, April 11, 2022. On June 6, 1944, Albert found himself as an Engineer aboard a landing craft filled with combat troops heading to the beaches of Normandy. After D-Day, The Jefferson traveled to the Mediterranean, North Africa and Pacific. Born on June 29, 1925, in Riverside, NJ, he was the son of the late Oland W. and Catherine (Gross) Kershaw. Also survived by his sister, Catherine Kershaw Conner of Melbourne, FL, James Kershaw of Melbourne, FL and Francis Kershaw of New Mexico. He was also preceded in death by six brothers and sisters and one grandson. He is survived by his loving wife of 74 years, Ruth (Lippincott) Kershaw and his loving son and daughter-in-law, Steve and Bobbi Kershaw of Moneta, VA, as well as sons, Albert and Tom Kershaw; eight grandchildren, seventeen great-grandchildren and one great-great grandchild. Al was the owner and operator of Kershaw’s Amoco in Delanco, NJ. In lieu of flowers, please consider memorial contributions to the D-Day Memorial, P.O. Box 77, Bedford, VA 24523 or you can visit D-Day Memorial online and donate. A PRIVATE Celebration of his life will held at a later date. Arrangements by Conner-Bowman Funeral Home & Crematory, Rocky Mount.

The family of Albert Francis Kershaw created this Life Tributes page to make it easy to share your memories.

Send flowers to the Kershaw family.