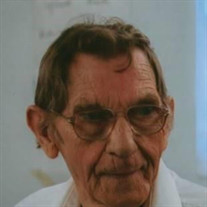 Bulas Harrington Kincaid, 91, of Henry, VA passed away peacefully Monday, July 26, 2021 after a long illness. He was born April 13, 1930 in Maynor, West Virginia to Thomas and Ethel Evans Kincaid. In 1963, he moved to Virginia where he would soon meet the light of his life, Elaine. He worked at American Furniture Company in Martinsville for many years up until his retirement in the 1990s. While Virginia became his permanent home, his home state of West Virginia always held a special place in his heart. Bulas loved old time country music and bluegrass and had incredible talent playing the guitar and singing. He gained the nickname “Cowboy” at the places he would play. He also enjoyed old cars, collecting diecast, and watching Western movies and his favorite TV shows Gunsmoke and The Andy Griffith Show. He was a kind, good-hearted man who was loved by everyone who had the privilege to know him. Preceding him in death were his parents, four brothers Hillard, Delfin, Kenneth and Junior; one sister, JoAnn; mother and father-in-law, Arthur and Hester Pauley; special friend, Clyde Adkins and the family’s beloved cat, Pup. Left to cherish his memory are his wife of 57 years, Elaine Pauley Kincaid; son, Ricky Kincaid; daughter, Donna Underwood and son-in-law, Bert; sister-in-law, Barbara Oliver; twin sister, Arbutus Lake; sisters, Virginia Johnson (Ralph), Roselene Clark and Nancy Bartenfelder (Tom); brother, Carlos Kincaid (Sandy) and so many nieces, nephews, cousins, friends and neighbors too numerous to mention. He will also be dearly missed by his daughter’s 17 year old cat, Sadler who absolutely adored him. All services will be private. Arrangements by Lynch Conner Bowman Funeral Home, 140 Floyd Avenue, Rocky Mount, VA 24151. (540) 483-5533

Bulas Harrington Kincaid, 91, of Henry, VA passed away peacefully Monday, July 26, 2021 after a long illness. He was born April 13, 1930 in Maynor, West Virginia to Thomas and Ethel Evans Kincaid. In 1963, he moved to Virginia where he would... View Obituary & Service Information

The family of Bulas Harrington Kincaid created this Life Tributes page to make it easy to share your memories.

Send flowers to the Kincaid family.