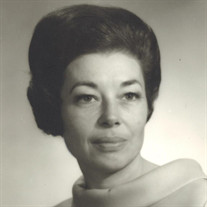 Born in Washington, DC on February 23, 1927, Claudia Helene Hutchison Clark died on March 28, 2020 in Moneta, Virginia after a long battle with Alzheimer's disease. Mrs. Clark was a delightful lady with an easy smile and a warmth about her that radiated to all those surrounding her. She was devoted to her family and very close to, and proud of, her children. A native Washingtonian, she grew up in Spring Valley with four sisters and a brother. Her father was the longtime owner of Hutchison Furniture located originally in downtown DC and later in Northern Virginia. Mrs. Clark and her four sisters all attended The Madeira School. After graduating from Madeira, she went on to graduate from Rollins College in Winter Park, Florida where she was voted a Top Ten Campus Beauty. Mrs. Clark was a homemaker for her husband and two children. She served in many supporting roles for The Florence Crittenden Society, including the chairmanship of the annual fundraising event. Mrs. Clark loved gardening and was a member of the Kenwood Garden Club for many years. She grew up in, and was an active member of, St. Albans Church, serving on the altar guild. Mrs. Clark was also a member of The Washington Club and Columbia Country Club until 1988 when she and her husband built a home and moved to Henlopen Acres on the coast of Delaware. In 2006, Mrs. Clark was predeceased by her beloved husband of 56 years John Robert Clark, Jr. Survivors include her daughter Cecelia Clark Melesco and husband David of Rocky Mount, Virginia and their five children and spouses(and two great-grandsons), and her son John Robert Clark III and wife Mary of Wilmington, North Carolina and their four children. She is also survived by her youngest sister Joanne Snyder and her husband Jim, by her brother-in-law Bill Clark and his wife Elizabeth, and by numerous nieces and nephews. A private interment will be held at St. Mark's Cemetery, Fairland, Maryland. In lieu of flowers, donations should be made in Mrs. Clark's memory to the Alzheimer's Association, 3959 Electric Rd. Suite 357, Roanoke Virginia, 24018 or to Medi Home Health & Hospice, 4415 Pheasant Ridge Rd., Suite 102, Roanoke, VA 24014. Arrangements by Conner-Bowman Funeral Home & Crematory, 62 VA Market Place Drive, Rocky Mount, VA 24151. www.connerbowman.com

Born in Washington, DC on February 23, 1927, Claudia Helene Hutchison Clark died on March 28, 2020 in Moneta, Virginia after a long battle with Alzheimer's disease. Mrs. Clark was a delightful lady with an easy smile and a warmth about her... View Obituary & Service Information

The family of Claudia H. Clark created this Life Tributes page to make it easy to share your memories.

Send flowers to the Clark family.