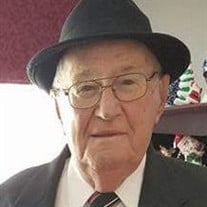 Ed Richard Smith, 89, of Wirtz, VA departed this life early Sunday morning, February 17, 2019, at his home. He was born October 1, 1929 the son of the late John Calvin Smith and Julia Mary Smith. He was preceded in death by seven brothers, Tansey,... View Obituary & Service Information

The family of Ed Richard Smith created this Life Tributes page to make it easy to share your memories.

Send flowers to the Smith family.