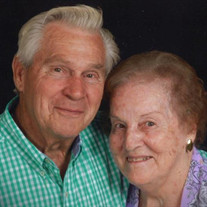 Elwood Junior Hall age 87 of Rocky Mount passed away at his home on Monday, January 17, 2022. Elwood was born on September 1, 1934, a son of the late Taylor McKinley Hall and Sally Ann Hodges Hall. He was also preceded in death by his loving... View Obituary & Service Information

The family of Elwood Junior Hall created this Life Tributes page to make it easy to share your memories.

Elwood Junior Hall age 87 of Rocky Mount passed away at his home...

Send flowers to the Hall family.