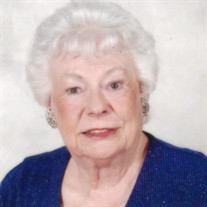 Frances Kesler Murray, born March 23, 1927 at Roanoke Memorial Hospital, passed away on Saturday, April 3, 2021 in Roanoke, Virginia. She was the daughter of Rosa Lee Garrett and Lawrence Curtis Kesler and grew up in old Southeast Roanoke. She married Homer Greer Murray on September 24, 1952, and was a resident of Murray Hill, Boones Mill for 66 years. They enjoyed extensive world travels, visiting all 50 states as early as 1965; all Canadian provinces; and all continents except Antarctica. Frances wrote a book about her husband and their travels, Homer, Homer, Homer. Frances graduated from Jefferson High School on D-Day, June 6, 1944, and was employed by Shenandoah Life Insurance Company until retirement April 1, 1982 as executive assistant. She was an active member of Boones Mill United Methodist Church and a charter member of the Boones Mill Garden Club and Red Hats of Franklin County. She was a former member of the Boones Mill Lions Club and was awarded the Melvin Jones Foundation Honor and served with her late husband as founder of its Apple Festival. She was a past worthy matron of Carrie Lee Chapter, Order of the Eastern Star. In addition to her parents, she was also preceded in death by her husband, Homer Murray, and a sister, Kathryn Burger of Missouri. She is survived by one sister, Edna Lee Knight of Bonifay, Florida; one cousin, Bob Eames (Sarah) and nieces, nephews, and many friends far and near. Funeral services will be conducted from Conner-Bowman Funeral Home at 11:00 a.m. Friday, April 9, 2021 with the Rev. James Rodden officiating. Interment will follow in Mountain View Memorial Park where she will be laid to rest next to her beloved husband, Homer. The family will receive friends one hour prior to the service beginning at 10 a.m. at the funeral home. Flowers will be accepted, or memorial contributions may be made in her name to Boones Mill United Methodist Church, P.O. Box 288, Boones Mill, Virginia 24065. Due to the mandates placed by our Governor over COVID-19, we will be following the guidelines for social distancing and face masks. Arrangements by Conner-Bowman Funeral Home & Crematory, 62 VA Market Place Drive (Route 220 @ Wirtz Road), Rocky Mount, VA 24151. www.connerbowman.com

Frances Kesler Murray, born March 23, 1927 at Roanoke Memorial Hospital, passed away on Saturday, April 3, 2021 in Roanoke, Virginia. She was the daughter of Rosa Lee Garrett and Lawrence Curtis Kesler and grew up in old Southeast Roanoke. She... View Obituary & Service Information

The family of Frances Murray created this Life Tributes page to make it easy to share your memories.

Send flowers to the Murray family.