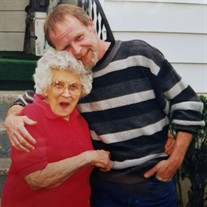 Frank Edward “Frankie” Hayslett age 70 of Roanoke passed away on Friday, April 12, 2019 at his home after a brave and courageous battle with lung cancer. Frankie served in the U.S. Army National Guard, worked for Ingersol Rand and retired from ITT Corporation. He was a loving, devoted and caring father, grandfather and friend to all that will be remembered as a gifted musician with a voice of a songbird. He was an avid outdoorsman having a passion for baseball and a love to hunt and fish. He was most proud of accepting Christ and making it official on August 5, 2018 as he was baptized in the creek at his second home on Potts Creek. He was born on January 8, 1949 a son of the late Julian Monroe and Viola Frier Hayslett and he was also preceded in death by a very special friend, Robin Seaman. Frankie is survived by his sons, Blake Hayslett (Faye Ayers), Travis Hayslett and wife, Amanda, and Dakota Hayslett; daughter, Brandy Orange (Rodney); grandchildren, Ryan Hayslett and Amber Ayers; great-grandchildren, Lily and Ava; his former wife and friend, Donna Austin; brothers, Monty Hayslett (Sharon) and Jimmy Hayslett (Cathy); nieces, Julie Douglas (Trent) and Kim Gajan (Ray); nephews, Brian Hayslett (Alisa) and David Hayslett (Angela). He is also survived by some very special friends, Carlos Caldwell, Vance Conner, Victor Conner, Dave Ferguson, Ken McNeal, Wayne Douglas and Kip Fisher; other family members and many friends. In lieu of flowers, the family has requested that memorial contributions be made to the American Cancer Society P.O. Box 22478 Oklahoma City, OK 73123 A memorial service celebrating his life will be conducted 11:00 a.m. Saturday, May 4, 2019 at Conner-Bowman Funeral Home with military honors. His family will receive friends one hour prior to the service beginning at 10:00 a.m. Arrangements by Conner-Bowman Funeral Home, 62 VA Market Place Drive (Route 220 @ Wirtz Road) Rocky Mount, VA 24151 www.connerbowman.com

Frank Edward &#8220;Frankie&#8221; Hayslett age 70 of Roanoke passed away on Friday, April 12, 2019 at his home after a brave and courageous battle with lung cancer. Frankie served in the U.S. Army National Guard, worked for Ingersol Rand and... View Obituary & Service Information

The family of Frankie Hayslett created this Life Tributes page to make it easy to share your memories.

Send flowers to the Hayslett family.