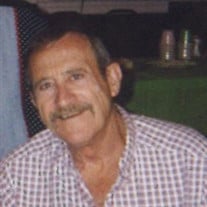 Gary Lynn "Big Gary" Russell, age 76 of Hardy, was called home to be with his Lord and Saviour on April 10, 2021, surrounded by his children. He is now able to breathe freely with no more suffering and is walking the streets of gold. He was born on December 16, 1944, in the foothills of Tennessee to the late Luther and Lena Russell. He was also preceded in death by his infant daughter, Veronica Lynn Russell. Left to cherish his memory are his children and grandchildren, whom he loved dearly and were the light and joy of his life, Daughter, Katrina (Scott) Foley of Hardy, VA, sons, Gary II "Lil G" (Tanya) Russell of Roanoke, VA and Aaron Russell of Hardy, VA, Grandchildren: Delaney Foley, Owen Russell, Wyatt Russell, MaKayla "KK" Russell and Lily Russell, a Brother, Jerry "Goob" (Linda) Russell of Salem, VA and a sister, Sandra Crow of Elizabethton, TN, and numerous nieces, nephews and a host of special family and friends. Big Gary was a Veteran of the U.S. Army where he proudly served during the Vietnam war and later retired from the N&W Railroad. He was a kind, caring and loving father who worked hard to provide for his family but somehow managed to find time to spend with his kids and coach all their sports. After retiring from the railroad, Big Gary and his former wife (and mother to his children) Colleen, owned and operated Franklin Acres Swim & Tennis Club in Hardy for 12 years before having to give it up for health reasons. He dearly loved being at the pool with all the kids and watching them grow up and they all loved Big Gary. He was always ready to lend a hand to his neighbors and anyone in need. His children want to thank all his doctors and nurses that took care of him through the years at the VA Hospital. We are especially thankful for his longtime doctor and friend, Dr. George Chaconas, who was always there for Big Gary. Also, so thankful for Dr. Sarah DeWitt and her team at the Palliative & Support Care Unit at Roanoke Memorial Hospital for their love and kindness for our Dad during a time when it was needed the most. In lieu of flowers, please consider memorial contributions to the Alzheimer's Association. Funeral services will be conducted from Conner-Bowman Funeral Home (Rt 220 Chapel) 2:00 p.m. Friday with Pastor Pete Trout officiating. Interment will follow in Franklin Memorial Park. His family will be receiving friends one hour prior to the service beginning at 1:00 p.m. Friday at Conner-Bowman Funeral Home, 62 Virginia Market Place Dr., Rocky Mount.

Gary Lynn "Big Gary" Russell, age 76 of Hardy, was called home to be with his Lord and Saviour on April 10, 2021, surrounded by his children. He is now able to breathe freely with no more suffering and is walking the streets of gold. He was... View Obituary & Service Information

The family of Gary Russell created this Life Tributes page to make it easy to share your memories.

Send flowers to the Russell family.