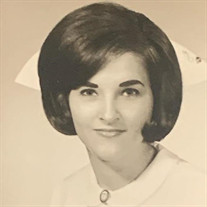 Daughter, Sister, Aunt, US Army Brat, Private Pilot, Registered Nurse 50 years, Captain US Air Force - Vietnam, friend, Wife, Mother to 2 boys and thanks to our wives putting up with us she is also the Mother of two girls she always wanted, Grandmother to 7, Great Grandmother to 4 and counting. Proud Italian. Fiercely American. Tough like no other. She knows Jesus, she loves her boys, she cherishes her grands, she served proudly. If you had the chance to know her you are blessed. Angels are among us...selfishly we wish she could have been here longer...we will miss her desperately, we will celebrate her uncommon life, she will continue to influence us for generations to come, she is at peace in Heaven and forever in our memories. We love you Mom. Joan was born, 27 January 1944 in Des Moines, IA. Joan passed away 25 November 2020 at home, surrounded by loved ones, in Boones Mill, VA. Joan was the daughter to Fred and Regina Smalley, and sister to Fred Smalley. She was promoted from Richard Henry Dana Junior High School in San Diego, CA in 1959. Next Joan graduated from Point Loma High School, Class of 1962. Joan was a graduate of Mercy College of Nursing, Class of 1965. After returning from Vietnam, she completed her Bachelor of Science in Applied Arts and Sciences Nursing from San Diego State University, Class of 1972. Joan served in the United States Military from 2 January 1966 to 2 January 1970, achieving the rank of Captain, in the US Air Force Nurse Corps. She earned her Private Pilots License in 1966. She married Daniel L. Muns, 8 April 1971. Joan became a Mother and gave birth to Daniel L Muns Jr, 29 July 1973 and Harry F Muns, 26 April 1975. She raised beef cattle and handled artificial insemination duties on the ranch with her sons. She learned how to keep score in her boys little league days and never missed a competition. Joan worked as a Registered Nurse for 48 years in total and made life long friends in her service. Joan was very creative and adventurous, traveling the world, wind surfing, practicing calligraphy, raising Bonsai trees, and loved animals as well as gardening. Once Grandchildren began to arrive they became the main event for Joan throughout her remaining years. Joan is survived by Harry and Michelle Muns (Son and Daughter), Jillian Muns (Grand Daughter), Jackson Muns (Grandson), Danny and Angela Muns (Son and Daughter), Morgan Spiess (Granddaughter ), Ashley Wright (Granddaughter), Harrison Muns (Grandson), Hayden Muns (Granddaughter), Heath Muns (Grandson), Roman Tuttle (Great Grandson), Blake Tuttle (Great Grandson), Sean Tuttle (Great Grandson), Bryson Henry (Great Grandson), Michael Smalley (Nephew), Brian Smalley (Nephew) Her funeral will take place at Miramar National Cemetery in San Diego, CA on January 27th, 10:30am. The funeral will be followed by a celebration of life at the home of Harry & Michelle Muns. Local arrangements by Conner-Bowman Funeral Home, Rt 220. Rocky Mount.

Daughter, Sister, Aunt, US Army Brat, Private Pilot, Registered Nurse 50 years, Captain US Air Force - Vietnam, friend, Wife, Mother to 2 boys and thanks to our wives putting up with us she is also the Mother of two girls she always wanted,... View Obituary & Service Information

The family of Joan Muns created this Life Tributes page to make it easy to share your memories.

Send flowers to the Muns family.