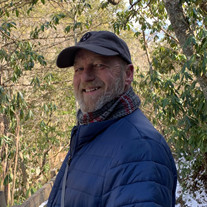 John Robert McNeil “Gramps” On Friday March 20th, John Robert McNeil, 60, of Wirtz, VA joined his father in heaven. He was born January 25, 1960 in Roanoke, VA. He is survived by his loving wife of 35 years, Barbra; son, John (Beth); daughter, Libbie (Derrick) and four loving, funny and loud grandchildren, Logan, Penelope, Berkley, Oliver. Also surviving are mother, Frances; brother, Donnie (Sheila); sister, Mary (Wendell); brother, David. He is preceded in death by his father, Donald. John loved going on adventures and camping trips with his wife. He loved hiking and traveling, seeing new mountains, trails and water falls. He spent lots of time with his family while frequently telling them they’re too loud and hurting his ears. He brought so much laughter to silly tea parties and lots of board games that he almost never seemed to win. He will be remembered for his huge amount of knowledge about any and all things but most importantly, vehicles. His incredible skill was shared with many throughout the past 25 years as owner and operator of McNeil Import Services which he now leaves to his left hand man, Derrick. A celebration of life will be shared privately by family at a later date. In lieu of flowers please consider donating to the Ronald McDonald House Charities of Southwest Virginia

The family of John Robert "Gramps" McNeil created this Life Tributes page to make it easy to share your memories.

Send flowers to the McNeil family.