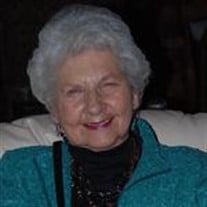 Mrs. Katherine (Robertson) MacGregor, 87, of Peabody formerly of Topsfield, beloved wife of the late James A. MacGregor Jr., passed away Friday, March 22, 2019 at Brooksby Village in Peabody. Born in Callaway, Virginia she was the daughter of the late John and Elizabeth (Cole) Robertson. She was raised and educated in Callaway and was a graduate of Callaway High School. Katherine continued her education at Roanoke College, where she met her future husband, received her Bachelor's Degree in English and later when her sons were in junior and senior high school, earned a Master's in Library Science from the University of Rhode Island. Katherine embarked on a long career as a librarian by first volunteering in the Danvers State Hospital library. She then went on to positions as Assistant Librarian, at Haverhill High School, Technical Librarian, at Varian Associates in Beverly, and finally part time at the Topsfield Public Library as their internet resource person during the first days of the World Wide Web. As a volunteer she was a pioneer in her field at the Ipswich River Wildlife Sanctuary in Topsfield, where she began using the internet to catalog the library and access the Library of Congress and other libraries through the computer. She later joined the Topsfield Historical Society where she cataloged a collection of historical books at the Parson Capen House and then carried on as their Librarian. A long-time resident of the Town of Topsfield, she was dedicated to her family, faith and community. She served her community through her work and volunteering at the Congregational Church of Topsfield's library. She was a loving wife, mother and grandmother, whose greatest joy was caring for and doting on her grandchildren. She traveled the world with her beloved husband and being an avid Croquet player once spent several days taking classes with her daughter in law Dana at the National Croquet Center in Florida. Katherine was out-going, fun-loving and will be deeply missed by her family, friends, and those whose lives she touched along the way. Surviving Katherine are her sister Nancy R. Glaize of Troy Alabama, sons, James A. MacGregor III and his wife Mary of Pepperell and Robert S. MacGregor and his wife Dana Courtney of Malaga, WA, her three granddaughters, Megan A. MacGregor of Scranton, PA, Sarah E. MacGregor and Emily C. MacGregor both of Groton, and she was predeceased by her brother John Robertson of Virginia Beach, Virginia and Elizabeth Robertson of Raleigh, North Carolina. Funeral services were held in the Chapel at Brooksby Village, Brooksby Village Dr., Peabody on Friday, April 5, 2019 at 10 A.M. Assisting the family with the arrangements was the Peterson-O'Donnell Funeral Home, 167 Maple St., (Rte. 62) Danvers. Expressions of sympathy may be made in Katherine's memory to The Home for Little Wanderers, 10 Guest St., Boston, MA 02135. Graveside services will be conducted 10:00 a.m. Wednesday, May 15, 2019 at the Callaway Community Cemetery. The MacGregor Family is being assisted by Conner-Bowman Funeral Home, 62 VA Market Place Drive, Rocky Mount, Virginia 24151 (540)334-5151 To share a memory or offer a condolence, please visit www.odonnellfuneralservice.com or www.connerbowman.com.

Mrs. Katherine (Robertson) MacGregor, 87, of Peabody formerly of Topsfield, beloved wife of the late James A. MacGregor Jr., passed away Friday, March 22, 2019 at Brooksby Village in Peabody. Born in Callaway, Virginia she was the daughter of... View Obituary & Service Information

The family of Katherine Robertson MacGregor created this Life Tributes page to make it easy to share your memories.

Send flowers to the MacGregor family.