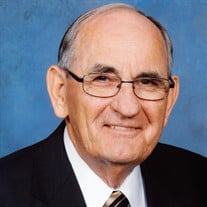 Lee David (L.D.) Arrington, Sr., 84, went to be with the Lord on the morning of September 2, 2021. He was born October 5, 1936, in Danville, VA, the son of Reverend Mayland Emmett Arrington, Sr. and Maggie O’Dell Barbour Arrington. L.D. was raised in Bassett, Virginia, where he was baptized by his father and later met his future bride, Mabel “Ruth” Mayhew. They married in 1954, moved to Rocky Mount in 1956, and were blessed with 67 years together. L.D.’s first entrepreneurial venture began in 1965, as the co-owner of a local grocery store, Foodtown. In 1968, he purchased Hugh’s Snack Bar, a local curb service drive-in restaurant. On December 1st, 1970, L.D. purchased the local Dairy Queen and with the help of his three children expanded the businesses and Arrington Enterprises, Inc., was founded. In 1996, Arrington Enterprises Inc. opened the area’s first Bojangles’ in Rocky Mount. After 65 years in business, Arrington Enterprises Inc. now operates Dairy Queen, Bojangles’, and Exxon locations across Southwest, VA, employing 225 team members. L.D. proudly represented his fellow franchisees in local, state, and national capacities within Dairy Queen and Bojangles’ brands. Along with his professional achievements, L.D. was also passionate about the local community and supported various charities, most notably The Children’s Miracle Network. For many years the Dairy Queen locations operated by Arrington Enterprises Inc. have been the largest Dairy Queen franchise contributor to the charity. He was also a visionary for the “Lights for Life” campaign, which enabled the purchase of technology to ensure every traffic light in Franklin County gives Fire, EMS, and Police the automatic right of way when they approach an intersection. This campaign was in honor of the brave Franklin County fire fighters that lost their lives in the line of duty. L.D. was also a founding member of Franklin Community Bank (now American National). In addition to his many roles as entrepreneur, philanthropist, visionary, employer, community leader, church deacon, and friend, L.D. was most proud of his role as husband, father, grandfather, and great-grandfather. His legacy will live on as his family continues to work together in the company he created, now with four generations working in the family business. Traveling across the country, with his wife Ruth, in their motorhome was one of his favorite activities. The couple completed their 8th cross country trip in December of 2002. L.D. was also known for his passion for antique cars, particularly his 1940 Lincoln Continental which was not only displayed in the 1940 World’s Fair in New York, but also won various National Best in Show awards. L.D. was fond of animals, especially his cats, and was proud to be a founding donor of the Franklin County Humane Adoption Center where the “Cat Room” was named in his honor. In addition to his parents, he was preceded in death by his sisters Geneva Arrington Harmon, Mary Alice Arrington Richardson, and brother Mayland Emmett Arrington, Jr. Surviving, in addition to his wife Ruth, are his children Lee “David” Arrington, Jr. and his wife Susan, Deborah Arrington Russell and her husband Bill, and Douglas Arrington and his wife Karen. Grandchildren, Brian Arrington and his wife Jonie, Jaime Arrington Manning and her husband Scottie, Travis Russell and his wife Kyle, and Trenton Russell. Great Grandchildren Nicholas Arrington, Hunter Manning, Madison Arrington, Taetym Russell, and Tannyr Russell. The family would like to give a special thanks to LaShara Wade, Sissy Jane Roberts, Mae Connor, Suzi Wright, and Pam Perdue, Martha Adkins and Pam Campbell for their love and care of L.D. over the past several years. A private service of remembrance and interment will be held at Sandy Ridge Baptist Church. Those who wish to remember L.D. in a special way may consider a gift in his memory to Planned Pethood Clinics (18401 Virgil H. Goode Hwy. Rocky Mount, VA 24151), or Freedom’s Last Chance (Cat Rescue), Inc. (90 Edgewood Farm Lane Wirtz, VA 28184.) Those wishing to pay their respects can find a registry to sign at one of his following restaurants: Dairy Queen 40 West, Bojangles’ Marketplace Drive and Plateau Plaza beginning Tuesday September 7th. Arrangements by Conner-Bowman Funeral Home, 62 VA Market Place Drive, Rocky Mount, VA 24151. www.connerbowman.com

The family of L.D. Arrington, Sr. created this Life Tributes page to make it easy to share your memories.