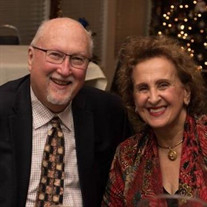 Larry Edward Iceman, 72, died suddenly at his Smith Mountain Lake home 0n 30 April 2019. Born in Massillon, Ohio, he was predeceased by his parents, Gerald and Garnet (Elliot) Iceman and a brother, Ron Iceman. He is survived by his beloved and loving wife of 30 years, Beatrice (Manti) Iceman. Also, 2 sons: Jason (Lena) Iceman of Cheshire CT and Joseph Iceman of Kissimmee FL and 2 grandchildren, Ben and Sarah Iceman, and a brother, Dennis (Laurrie) Iceman of Fredericksburg VA. Larry graduated with a B.S. in Chemistry from Kent State University, OH, and an M.B.A in Marketing from Ryder University, NJ. He worked for 7 years as a chemist at Rohm and Hass Co. in Philadelphia. He the worked for 30 years at Air Products & Chemicals in Allentown, PA. Before retiring in 2004, Larry served as Global Business Manager and Director of Business Development for Air Products. The Icemans retired to Smith Mountain Lake where Larry devoted himself to the community. He was president of the SML Lions from 2009-2010 while at the same time serving as president of the Smith Mountain Lake Association and later, on the SML Board of Directors. Larry co-ordinated the Water Quality Monitoring Program as well as Lake Clean-up. He was truly a "Custodian of the Lake." Larry received 2 prestigious awards: The Melvin Jones Fellow For Dedicated Humanitarian Services Lions Club International, and the 2015 Melvin Johnson Community Service Award for Dedicated Service to the SML Community. A world traveler, both for business and pleasure, Larry also believed that "every day at the Lake is vacation." He was an ardent boater, a gifted photographer, semi-successful fisherman, an accomplished sailor, and a fearless down-hill skier. He loved his family including 30+ years of Labrador Retrievers. Larry was a person worth knowing. Unforgettable. Unforgotten. In lieu of flowers, contributions may be made to: Smith Mountain Lake Lions Scholarship Trust, P.O. Box 655, Hardy, VA 24101 with The Iceman Family Scholarship Trust identified in the memo of the check. A tribute to Larry's exceptional life will take place at Conner-Bowman Funeral Home, 62 Virginia Marketplace Dr., Rocky Mount, VA 24151. Saturday, 25 May 2019 at 11 o'clock in the morning.

Larry Edward Iceman, 72, died suddenly at his Smith Mountain Lake home 0n 30 April 2019. Born in Massillon, Ohio, he was predeceased by his parents, Gerald and Garnet (Elliot) Iceman and a brother, Ron Iceman. He is survived by his beloved and... View Obituary & Service Information

The family of Larry Edward Iceman created this Life Tributes page to make it easy to share your memories.

Send flowers to the Iceman family.