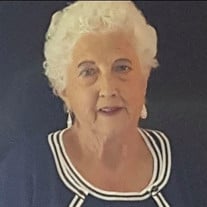 Margaret Caldwell Wilhelm, 75, of 3507 Upper Rich Patch Rd. of Covington, Virginia went to be with the Lord at home on Friday September 27th 2019. Mrs. Wilhelm was born January 9, 1944, in Covington, VA the daughter of the late Fred and Mary... View Obituary & Service Information

The family of Margaret Caldwell Wilhelm created this Life Tributes page to make it easy to share your memories.

Send flowers to the Wilhelm family.