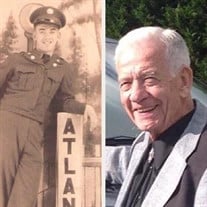 Okey Ray Ford, age 88, of Glade Hill, passed away Monday, November 11, 2019. He was born on August 2, 1931 in Davy, WV. He was preceded in death by his loving wife of almost 62 years, Janet Lorraine Perdue Ford; an infant daughter, Charlotte Anne Ford; his parents, Okey and Maude Ford, his in-laws, Millard and Lena Perdue; a brother and his wife, Henry and Rosa Ford. Surviving are his children, Kathy Rae and Tommy Cundiff, Patricia and Terry Schronce, and Terri and Frank Hodges; his grandchildren, T.C. III and Melissa Cundiff, Jeremy Ray Cundiff, Lena Heather Jones, Robbie and Tiffany Hodges, Kyle and Jacqueline Hodges; great-grandchildren, Raegan Allen, Olivia Allen, Karley Cundiff Tucker Hodges, Harper Hodges, Esrina Rae Hodges, and Isaac Montanez,; his brothers children, Robert Henry Ford, David Ray Ford and Jean Billips. Ray was a Purple Heart Korean War Veteran, of which he was very proud to serve his country. He was retired from the Kroger Company with 32 years of service. He was known as the “Meat Man” to many adults and the “Quarter Man” to many children, as he could magically make a quarter appear from behind a young child’s ear. God and family were very important to him. He loved his Franklin Heights Baptist Church family. The family asks that in lieu of flowers, donations be given to the church in his memory or to Good Samaritan Hospice, 2408 Electric Rd., Roanoke, VA 24018. Funeral services will be conducted 2:00 p.m. Thursday at Lynch Conner-Bowman Funeral Home (Town Chapel) with Dr. Stan Parris officiating. Interment will follow in Franklin Memorial Park with military honors. His family will be receiving friends from 1- 2 p.m. on Thursday before the service at the funeral home and on Tuesday and Wednesday at Ray’s house, 102 Farmview Rd., Glade Hill, VA 24092.

Okey Ray Ford, age 88, of Glade Hill, passed away Monday, November 11, 2019. He was born on August 2, 1931 in Davy, WV. He was preceded in death by his loving wife of almost 62 years, Janet Lorraine Perdue Ford; an infant daughter, Charlotte... View Obituary & Service Information

The family of Okey Ray Ford created this Life Tributes page to make it easy to share your memories.

Send flowers to the Ford family.