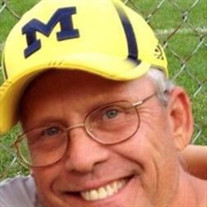 Paul Alan Peevey passed away peacefully on Saturday, August 28, 2021 surrounded by family and loved ones. Paul was born on December 15, 1959, in Wayne, Michigan, to Luther and Jean Peevey. Being born one of three brothers Paul always reminisced and laughed about his happy memories of growing up on the family’s campground with many stories of mischief between the three brothers. Paul enlisted in the Marine Corps in the winter of 1980 and proudly served until 1989 where he found a passion for his career in air traffic control, which he continued until his retirement due to Multiple Sclerosis in 2006. He took great pride in his country, his service in the Marine Corps, and the friendships and career that the Marine Corps helped create. Nothing compared in his mind or heart to time spent with his children and grandchildren, whom were the light of his life. Paul was a man who also cared deeply for University of Michigan Athletics, woodworking, and golf, all of which were shared at every opportunity with his family whether in the form of a trip to Ann Arbor, the golf course, or a newly gifted carving. For Paul everything always started with and came back to his family. Paul was preceded in death by his parents, Luther and Jean; son, Christopher; brother, Mark. Surviving Paul is his wife, Cheryl; children, Eric, Kevin and wife Ruthie, Ryan and fiancé Maggie, Jesse and wife Crystal; grandchildren, Samuel, David, and Theodore; brother, Michael and wife Gundula; niece, Kaitlin; and nephews, Brandon, Tyler, Chase, and Parker. A private celebration of Paul’s life will be organized for a Michigan football Saturday to be shared with an intimate group of family and friends. In lieu of flowers, the family has requested that donations in his memory be made to either the National Multiple Sclerosis Society or the Ronald McDonald House Charities.

Paul Alan Peevey passed away peacefully on Saturday, August 28, 2021 surrounded by family and loved ones. Paul was born on December 15, 1959, in Wayne, Michigan, to Luther and Jean Peevey. Being born one of three brothers Paul always reminisced... View Obituary & Service Information

The family of Paul Alan Peevey created this Life Tributes page to make it easy to share your memories.

Send flowers to the Peevey family.