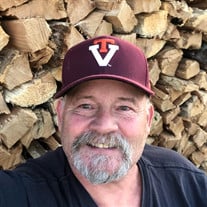 Ralph Elton Booth II June 22, 1956 - February 11, 2022 Ralph was born in Roanoke, Virginia, to Pauline and Ralph Elton Booth I. He attended Cave Spring High School and received two degrees from Virginia Polytechnic Institute, one in Horticulture, and one in Agronomy. Ralph used his degrees to start Booth’s Nursery in Burnt Chimney, Virginia, which achieved the milestone of 40 years in business in 2021 due to his hard work and persistence. Self-proclaimed to his family, Ralph was reigning Jeopardy champion, which he loved to watch every weeknight at 7:30. He wasn’t one for sympathies but tended to get choked up by Andy Griffith’s line of advice or by watching Lassie save the day. He could quote all of Clint Eastwood’s best lines, though. Ralph loved the outdoors, wildlife and the mountains. He loved fishing, deer and turkey hunting, and planting trees, and was quick to point out which trees were his all across the Roanoke Valley. He enjoyed splitting and stacking wood, and that was the fragrance that often followed him around. He was a wearer of Merrill slip on shoes that were frequently covered in Franklin County red mud which he tracked into the house. Ralph almost exclusively wore Carhartt short sleeve pocket tees and had one in every color they make. His desk was always messy but it brought him great pleasure to straighten a few papers and see the wood grain which he would tap on with his knuckles. He loved watching his Hokies play, and shared that love with two of his children who also attended his alma mater. He especially enjoyed an ice-cold Dr. Pepper and a Little Debbie Oatmeal Cream Pie. Ralph is preceded in death by his father, Ralph Elton Booth I, mother Pauline Smith Booth, brother Jeffrey Bocock, and brother-in-law Bobby Huddleston. He leaves behind a loving and patient wife, Anne Guthrie Booth, three children Danielle Carol Booth, William Hunter Booth, and James Edward Booth, all of whom he was very proud; sister Judy Huddleston and nephews Jeff and Greg Huddleston; and a faithful basset hound, Queenie, whose bad habits are primarily due to his encouragement. In lieu of flowers, the family asks that you take your kids fishing. Arrangements by Conner-Bowman Funeral Home, 62 VA Market Place Drive, Rocky Mount, VA. 24151

The family of Ralph Elton Booth created this Life Tributes page to make it easy to share your memories.

Send flowers to the Booth family.