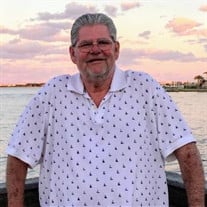 Raymond "Ray, Uncle Ray, Big Guy" Frances Hinson, Sr. of Boones Mill VA, born May 11, 1955, Prince Georges, MD, passed away peacefully on November 13, 2021, at the age of 66 in his home. Ray is survived by his wife, Cindy; children, Johnathan Hinson, Ray Hinson, Jr., Aimee Austin; brother, David Hinson; sisters, Debbie Brown (Wayne), Lynn Heron (Ralph); as well as 4 grandchildren; and numerous nieces and nephews; brothers in law, Ronnie Taylor (Linda), Scott Taylor (Crissy); sister in-law, Annette Taylor, Angie Waltz (Allen), Donna Hinson, Patty Hinson; and numerous siblings. Ray was preceded in death by his parents, Eugene Hinson Sr., and Carolyn Hinson; brothers, Eugene Hinson, Jr., Richard Hinson, Michael Hinson; daughter, Leigh Ann Horvath; father and mother in-law, Fred and Joanne Taylor; sister in-law, Theresa Hinson. Ray was devoted to his family and friends, there wasn't anything that he wouldn't do to help you. He had the kindest, generous heart of anyone we knew. His pleasant personality was contagious to everybody he met. The simplest pleasures in life brought great joy to Ray, such as sitting on his sister's front porch drinking coffee and listening to the trains go by, driving the old neighborhoods reminiscing of his younger days with his family. He loved the beach; in fact, he decorated his home in everything you can imagine that has to do with beach life and fishing. Lighthouses were his most favorite collectibles, and one of his dreams was to be able to visit and tour the inside of one. Ray absolutely loved his doggies and kitties, Lucy, Bella, Abby, Sophie, Tasha, and Anika. He referred to them as his "babies". There will be a Memorial Service for Ray's Life Celebration at Grace Assembly of God, 5530 Catawba Valley Drive, Catawba, VA 24070, with Pastor Loraine Taylor on November 29, 2021, at 11:30am. For those who cannot attend, the service can be viewed on Facebook. The family is asking in lieu of flowers, to donate in Ray's name to the ASPCA because of how much he loved animals. Arrangements by Conner-Bowman Funeral Home, 62 VA Market Place Drive, Rocky Mount, VA 24151

The family of Ray Hinson created this Life Tributes page to make it easy to share your memories.

Send flowers to the Hinson family.