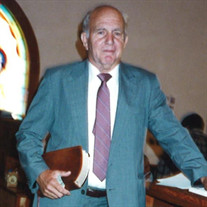 Robert Arthur (Bob) Richter of Moneta passed away on Monday, April 4, 2022 at the age of 88, just two days shy of his 65th wedding anniversary. He is deeply missed by his loving wife, Carol Anne Richter Jamison, his three children Robert Richter, Sheryl Stephens and Suzanne Hubler, their spouses, his eight grandchildren, three great-grandchildren and the countless people he touched during his lifetime. Bob was a warm, caring, godly man who shared his faith and his love with all he encountered. He served in the United States Marine Corps for nine years and never lost his commitment to his country. Later he attended Grace Bible Theological Seminary to immerse himself in the word of God and spent the remainder of his life sharing his beliefs. He retired from AT&T (formerly NJ Bell) after 38 years as an engineer in Premise Distribution Systems and he and Carol Anne started the next phase of their lives in Moneta. Though Maple Shade, NJ was his birth place, Smith Mountain Lake quickly became his second home. He loved fishing and worked part time at Bridgewater Marina where he enjoyed talking to the visitors, fixing boats and simply taking in the lake life. He dedicated time each week to teach adult Sunday School at Halesford Baptist Church and loved his mornings at the gym where he may have socialized more than he exercised – but both activities contributed to his health and joy. He built memories for his children and grandchildren with boating, fishing and sharing his joy of the water and the lake area. Bob leaves an immense void but his love for his Heavenly Father and his family is a comfort for those left to grieve his absence. He is now in his final home where he is at peace and rejoicing. A celebration of his life with military honors will be conducted 11:00 a.m. Saturday, May 7, 2022 at Halesford Baptist Church with Pastors Melvin Harris and Keith Floyd officiating. In lieu of flowers, the family asks that you honor Bob’s life by donating to foundations that support veterans. Arrangements by Conner-Bowman Funeral Home & Crematory, 62 VA Market Place Drive, Rocky Mount.

The family of Robert (Bob) Arthur Richter created this Life Tributes page to make it easy to share your memories.

Robert Arthur (Bob) Richter of Moneta passed away on Monday,...

Send flowers to the Richter family.