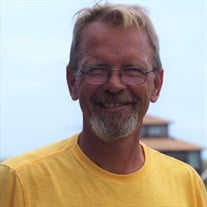 Steven Mark (Steve) Wright age 53 of Boones Mill passed away on Friday, August 6, 2021 at Carilion Roanoke Memorial Hospital after a long illness. Steve was the service manager for McCarthy Tire where he had worked for 33 years. Throughout his life and especially during his illness, his attitude was like the energizer bunny…”Just Keep Going”. He was a Christian who talked to his Lord and Savior daily. He will be remembered for being a loving husband, father, son, brother, and friend who will be missed by all. Steve was born on February 6, 1968 and was preceded in death by his mother, Shirley Ann Thurman Wright; his stepmother, Jeanette Layman Wright; and his canine companions Shelby and Tonka. He is survived by his wife, Sonia Austin Wright; daughter, Kristin Renee Wright; brothers, Tim Wright, Danny Wright and Robert Wright (Tonia); father, Charles D. Wright, Sr.; nephews, Joshua Wright (Brittany) and Timmy Wright. He is also survived by his father-in-law and mother-in-law, Donald and Jewell Austin; brother-in-law, Randy Austin (Lorraine); nephew, Travis Flinton (Morgan); niece, Candy Austin; other family members and friends including his family at McCarthy Tire; and his canine companions, Audrey and Stella. In lieu of flowers, memorial contributions may be made in Steve’s name to the American Cancer Society - P.O. Box 22478 - Oklahoma City, OK 73123. Funeral services will be conducted 11:00 a.m. Tuesday, August 10, 2021 at Conner-Bowman Funeral Chapel with Pastor Danny Poff officiating. Interment will follow in Mountain View Memorial Park. The family will receive friends on Monday, August 9th from 6 to 8 p.m. at the funeral home. Arrangements by Conner-Bowman Funeral Home, 62 VA Market Place Drive (Route 220 @ Wirtz Road), Rocky Mount, VA 24151. (540)334-5151 www.connerbowman.com

Steven Mark (Steve) Wright age 53 of Boones Mill passed away on Friday, August 6, 2021 at Carilion Roanoke Memorial Hospital after a long illness. Steve was the service manager for McCarthy Tire where he had worked for 33 years. Throughout... View Obituary & Service Information

The family of Steve Wright created this Life Tributes page to make it easy to share your memories.

Send flowers to the Wright family.