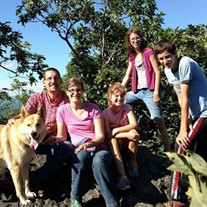 THOMAS ETHAN RUSGROVE ESTHER MARIE RUSGROVE JENNIE RUTH RUSGROVE Thomas (37) and his daughters, Esther Marie (14) and Jennie Ruth (11) from Todd, NC and originally from Franklin County were taken from us in an auto accident on Monday, June 24, 2019. Thomas is preceded in death by his mother, Lois Ruth Rusgrove. Surviving to cherish their memories are his wife, Leslie Holt Rusgrove; son, Joel Ethan Rusgrove; father, Richard Rusgrove and wife, Mary; sister, Susan R. Weeks (Joe); brothers, Jeffrey (Kim), Daniel (Judy), Matthew (Stephanie), Andrew (Sara); father and mother-in-law, Michel and Diane Holt; sister-in-law, Katelyn Parks (Shane); many nieces, nephews, and friends. Esther and Jennie are survived by their mother; Leslie Holt Rusgrove; brother, Joel Ethan Rusgrove; grandparents, Michel and Diane Holt, Richard and Mary Rusgrove; many aunts, uncles, cousins, and friends. If you were ever blessed with meeting them, then you know their love for you and most importantly, their love for the Lord. 1 Corinthians 15: 52 & 57 “In a moment, in the twinkling of an eye, at the last trump: for the trumpet shall sound, and the dead shall be raised incorruptible, and we shall be changed. But thanks be to God, which giveth us the victory through our Lord Jesus Christ.” A Celebration of Life will be held 3:00 p.m. Sunday, October 6, 2019 at Franklin Heights Church with Pastor Kevin Powell officiating. Their family will be receiving friends from 1-3 p.m. before the service on Sunday at the church. Arrangements by Conner-Bowman Funeral Home, 62 VA Market Place Drive (Route 220 at Wirtz Road), Rocky Mount, VA 24151 www.connerbowman.com

The family of Thomas Ethan Rusgrove created this Life Tributes page to make it easy to share your memories.

Send flowers to the Rusgrove family.