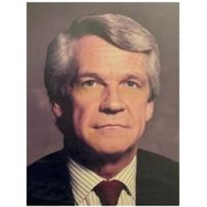 Former Sheriff, W. Q. "Quint" Overton Sr., age 83 of Rocky Mount passed away on Tuesday, October 5, 2021. Sheriff Overton began his law enforcement career as a Virginia State Trooper in Franklin County in 1959. He served in that capacity until he moved to the Virginia Department of Alcoholic Beverage Control in 1973. He began his remarkable tenure as Franklin County Sheriff in 1976 at age 37 and served as Sheriff until his retirement in 2007. When he retired, he was the longest sitting Sheriff in the history of Franklin County with 32 years of dedicated service as Sheriff and a total of 48 years in law enforcement. As Sheriff, he believed it was important to have a consistent standard for law and order and provide a community where families felt safe. Sheriff Overton embodied what it meant to be a public servant as he was known for always being available to the citizens of Franklin County and strongly held the view that his deputies be available as well. Sheriff Overton led by being the example. If someone had a problem, they could always reach out to him, and he would be there to assist. He began a tradition of deputies escorting and saluting funerals, a service he believed gave tremendous respect for the citizens under his care which remains in effect today. If you knew Sheriff Overton, you knew he cared for the people of Franklin County. This dedication was experienced by many in youth sports, primarily sandlot football, as he coached for more than a decade. Those that were under his leadership, both in law enforcement and on the field, speak of him with honor and respect and how he impacted their lives in positive ways. It is heard often by many within the community how there will never be another like him. Sheriff Overton was proceeded in death by his loving wife, Ann Marie Ewers Overton; brothers, Floyd M. Myers, James W. Overton Jr, Otto S. Overton, Campbell L. Overton, Eugene Overton Sr, Wyatt Lee Overton; sisters, Breetie Jenkins and Grace Tuttle. He is survived by sons Sheriff W.Q. “Bill” Overton, Jr. (wife Nancy) and David Wayne Overton (Kelly Kuykendall) and grandchildren Joshua Overton (wife Katie), Casey Walters (husband Gavin), Courtney Huffman (husband Charles), Devin Overton, Will Overton, Cate Overton and nine great-grandchildren. Family visitation will be head on Sunday, October 10, 2021, from 3:00 to 6:00 pm at Franklin Heights Church. A funeral service will be held at the church on Monday, October 11, 2021, at 2:00 pm. with Dr. Stan Parris and Pastor Ronald Coleman officiating. Graveside services will follow at Franklin Memorial Park. In lieu of flowers, memorial contributions may be made to the Juvenile Diabetes Research Foundation. Arrangements by Conner-Bowman Funeral Home, 62 VA Market Place Drive, Rocky Mount, VA 24151

The family of W. Q. (Quint) Overton Sr. created this Life Tributes page to make it easy to share your memories.

Send flowers to the Overton family.