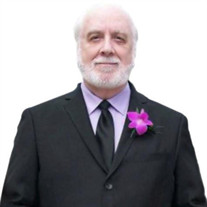 Frederick Earl Woods | 2020 | Obituary April 18, 2020 Frederick Earl Woods was born in Springfield, VT on May 11, 1943 to Percival and Alice Woods, the third of seven children. He went home to be with the Lord on April 18, 2020. He leaves behind his wife of 55 years, Elizabeth Jean [Crandall]. His legacy includes 4 children. Daughter Natalie Gilbert and husband (David) of West Lebanon, NH; Daughter Onycha Yosef [born Sylvia] and husband (Earnest) of Clearwater, FL; Son Nathan and wife (Kim) of Montgomery, AL; Son Stephen and wife (Aimee) of Clearwater, FL; as well as 18 grandchildren and 3 great grandchildren. Fred found the Lord at a young age along with his whole family, during a town wide revival led by Pastor Harry Snook at Oak Chapel in their small village in Bridgewater, VT. At that moment, the entire course of his life and the destiny of his whole family, would take a dramatic change to follow Christ. Fred decided in his heart that he wanted to devote his life to ministry, and chose to attend bible college to prepare himself for a life devoted to the service of the Lord Jesus Christ upon graduating from Woodstock Union High School in Woodstock, VT in 1961. Fred met Elizabeth, the love of his life, while attending Elim Bible Institute in Lima, NY. The couple was married on October 10, 1964 in Williamsport, PA. where they would begin their lives together, and where their firstborn daughter Natalie would be born in 1968. Soon after, the little Woods family would move to New Hampshire, where they would reside for the next 41 years. Within a short amount of time, Fred and Elizabeth became involved in a small church meeting called Dartmouth Area Christian Fellowship on the grounds of Dartmouth College in Hanover, NH. The church continued to grow, and ordained Fred as an elder in August of 1984, where he and Elizabeth would be in ministry for the next 23 years. Fred and Elizabeth began to have a burden for the community of Claremont, NH. In 1997, Fred and Elizabeth opened the church Living Faith Fellowship, where they would pastor until retiring in 2006. Fred and Elizabeth moved to Rocky Mount, VA in 2011 to help care for her dear mother Marjorie Crandall while attending Blue Ridge Gospel Tabernacle, founded by her father Joseph Crandall, and soon found their home in Boones Mill, VA. During his lifetime, in addition to his ministry in the United States, Fred was given opportunities to minister in Europe, Africa, Russia, and Israel. Fred and Elizabeth have devoted their entire lives to the ministry of intercession. Fred was a prayer warrior, and devoted himself entirely to prayer and the study of God’s Word. Even in retirement, Fred and Elizabeth led an intercessory prayer group in Roanoke, VA at Grace Fellowship where he ministered up until the day before he passed. Fred was a tremendous husband, father, grandfather, and brother to his 6 siblings and their spouses. He was a faithful family man and dear friend of God. He was unwavering in his devotion to his wife, his family, and to the Lord Jesus Christ. He was extremely gifted in so many ways. There was nothing that Fred could not do if he put his mind to it. In his early years, he was involved in chorus, band, and was a fantastic athlete playing multiple sports. Fred was also quite an outdoorsman. After his father retired from Dartmouth College, Fred secured a position in the Physics Department at Dartmouth. The same department that his father had worked in for 21 years. Fred worked for Dartmouth College for 26 years, and spent most lunch hours praying in Rollins Chapel for revival. Fred leaves behind a tremendous legacy of Faith and prayer. His span of influence reached thousands of lives that he touched in the many years of ministry at both church and home. We would like to send our love and thanks to the many thoughtful people who have reached out to us with their love and condolences during this time of bereavement. Arrangements made by Conner-Bowman Funeral Home

The family of Frederick Earl Woods created this Life Tributes page to make it easy to share your memories.

Send flowers to the Woods family.